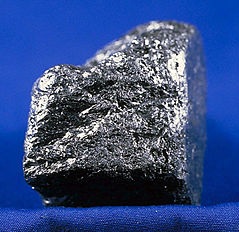 Graphite is an allotrope of carbon. It was named by Abraham Gottab Wernen in 1789 from the Greek word ‘graphein’-“to draw/write”, for its use in pencils where it is commonly called lead. Diamond and coal being other allotropes of carbon they too share the same chemistry but have different structures and very different properties. The crystal structure system of graphite is hexagonal. Where as diamond is isometric in structure. Graphite holds the distinction of being the most stable form of carbon. Under standard conditions graphite may be considered the highest grade of coal, just above the anthracite and alternatively called meta-anthracite. Somewhat of surprise is that at surface temperature and pressures, graphite is stable form of carbon. Infact all diamonds at or near the surface of the earth are currently undergoing a transformation of its graphite. This reaction fortunately is extremely slow. Graphite being one of the softest mineral known to a man, it is produced through metamorphism of organic material in rocks. The associated minerals of graphite include quartz, calcite, mica, iron meteorites and tourmalines.

Graphite was used by the 4th millennium B.C. Marica culture to create a ceramic paint to decorate pottery during the Neolithic Age in southeastern Europe. Sometime before 1565 (some sources say as early as 1500), an enormous deposit of graphite was discovered on the approach to Grey Knotts from the hamlet of Seathwaite in Borrowdale parish, Cumbria, England, which the locals found very useful for marking sheep. This particular deposit of graphite was extremely pure and soft, and could easily be broken into sticks. This remains the only deposit of graphite found in this packed form.

5. Other types of graphite:

5.1. Expanded graphite: It can be made by immersing natural flake graphite in bath of chromic acid, then sulphuric acid, which forces the crystal lattice planes apart, thus expanding the graphite. Uses: To make graphite foils, to insulate molten metals.
5.2. Intercalated graphite: Structure of CaC6 graphite forms intercalation compounds with some metals and small molecules. In this, atoms get sandwiched between the graphite layers. A prominent example of an intercalation compound is potassium graphite, denoted by the formula KC8. Uses: As a super conductor.
5.3. Synthetic graphite: It is prepared by converting petroleum coke to a graphitic structure at a temperature of about 30000C in an electrical resistance furnace. This graphitised carbon can be missioned into various shapes. Uses: For the manufacture of electrodes, lubricants and refractory bricks.
5.4. Pyrolytic graphite: It is produced by the thermal decomposition of hydro carbon gas in an evacuated chamber. It is just like a synthetic graphite of very high purity and crystallinity. Uses: As nose cones in the missile industry.

a. Colour is steel black to grey.
b. Crystal habit is tabular.
c. System is hexagonal.
d. Cleavage is perfect in one direction.
e. Hardness is 1-2.
f. Fracture is flaky
g. Lustre is metallic earthy.
h. Streak is black.
i. Density is 2.09-2.23gm/cm3.
j. Refractive index is opaque.
k. Soluble in molten Ni.
l. Good conductor of electricity and heat.
m. With stand the temperature upto 30000 C.
n. It can burn in the presence of oxygen in between 6200C and 7200 C.

a. Graphite and graphite powder are valued in industrial applications for its self-lubricating and dry lubricating properties.
b. Micronized amorphous graphite is very much useful in the manufacturing high class pencil leads.
c. Graphite is having tendency to facilitate pitting corrosion in some stainless steel and it can promote galvanic corrosion between dissimilar metals.
d. Flake graphite of minimum 85% purity can be used in the crucible industry.
e. Amorphous and crystalline graphite are used in the foundries.
f. Natural amorphous and fine flake graphite are used in brake linings or brake shoes for heavier vehicles.
g. Natural graphite can be used in zinc-carbon batteries. h. Graphite can be used in electric motor brushes.
i. Graphite bricks of extremely high purity are used as moderator in atomic reactors.
j. Natural graphite is mostly consumed for refractories in steel making.

8.1 Mining: Graphite is mined around the world by both open pit and underground methods. Flake graphite and amorphous graphite both are mined under open pit methods. Underground and lump graphite are only mined in Sri Lanka. The open pit mines usually employs equipment to scoop up the ore which is usually put into trucks and moved to the plant. The underground graphite mines employing drilling and blasting to break up the hard rock on which is moved by mine cars pulled by locomotives.
8.2 Beneficiation: Graphite usually needs beneficiation. Amorphous graphite and vein graphite beneficiated by labourer’s hand-picking out the pieces of gangue and hand screening the product. The great majority of the world flake graphite production is crushed and beneficiated by floatation. Being graphite is very soft and coats the particles of gangue, treating graphite by floatation encounters big difficulty. This makes the marked gangue particles float off with the graphite to yield very impure concentrate. There are two ways of obtaining a sale concentrate and product is regrinding and floating it again.

Rajasthan, Orissa, Andhra Pradesh, Bihar, Gujarat, Tamil Nadu plays main role in the production of graphite. Orissa contributes about 80% of the total marketable grade produced in the country. India is self-sufficient in the graphite production.

Graphite is found in almost every country in the world. According to the United States geological survey (USGS), world production of natural graphite in 2008 was 1,110 thousand tonnes (Kt), of which the following major exporters: China (800Kt), India (130Kt), Brazil (76Kt), North Korea (30Kt) and Canada (28Kt). Graphite is not mined out in U.S. but as production of synthetic graphite in 2007 was 198Kt value at $1.18 B. U.S. graphite consumption was 42Kt and 200Kt for natural and synthetic graphite. South Korea plays main role of producing graphite followed by Australia.