Introduction:
Dense Medium Separation(DMS) in other terms what is called as Heavy Medium Separation (HMS).In this process Heavy liquids of suitable density are used, so that lighter density mineral naturally float and, while those denser than it sink. In such a way this DMS process also called as sink-float process. Dense Medium Separation is a well known Technique for separating particulate solids of different densities in a mixture. In simple terms it is a suspension of dense particles in a liquid. The Mixture of particles for separation is mixed with suspension, and the different particles allowed to Sink or Float. It is the simplest of all the gravity process in principle wise and it is considered as Standard Laboratory method for separating minerals of different Specific gravity.

In DMS we can separate material at any required density, with a high degree of efficiency even of the Near -Density material. The density separation can be closely controlled with in a relative density of ±0.005 kg/l and can be maintained, under normal conditions, for indefinite periods. The separating density can, however, be changed at will and fairly quickly, to meet varying requirements. The process is, however, rather expensive, mainly due to the ancillary equipment needed to clean the medium and the cost of the medium itself.
Dense medium separation is applicable to any ore in which, after a suitable degree of liberation by crushing. This process is most widely applied when the density difference occurs at a coarse particle size, as separation efficiency decreases with size due to the slower rate of settling of the particles. Case separation can be effective when the particles diameter is more than 4mm in diameter, and the difference in specific gravity is 0.1 or less. Separation down to 500 microns, and less, can be made by the use of centrifugal separators.

TetraBromo methane (TBE) having a specific gravity 2.96 is diluted with white spirit (sp.gr.1.58) to give densities below 2.96.Bromoform (sp.gr.2.89) mixed with carbon tetra chloride to give density in the range of 3.3. Aqueous solutions have certain advantages over organic liquids, they are non-toxic and of lower viscosity, and densities up to 3.1 can be easily achieved. Many heavy liquids give off toxic fumes and must be used with adequate ventilation. Clerci solutions are useful to separation at densities up to 4.2 at 20°C but must be handled with extreme care as they are too much poisonous.

The fractions which influence the suspension in DMS are increasing the shear forces as the particles and decreasing the viscosity of the suspension. The viscous effect may be decreased by agitating the medium, which causes the elements of liquid to be sheared relative to each other. In practice the medium is heavier static, as motion is imparted to it by paddles, air, etc., and also by sinking material itself. All these factors, by reducing yield stress, tend to bring the separating density as close as possible to the density of the medium. Agitation being necessary to maintain the suspension and lower the viscosity.

These are comprises of vessels, into which the feed is introduced and floats are removed by the overflow. In this unit removal of sink is most difficult .In gravitational vessels the aim is to discharge the sink particles without disturbing the sufficient of the medium to cause the down ward currents down ward currents in the vessel.

Wemco cone separator: It has relatively high sinks capacity and widely used for ore treatment. It can accommodate feed size up to 10cm as the size of the cone diameter is around 6mts, with capacities up to 500 t/h. By free fall the feed is introduced on the surface of the medium to plunge several centimeters in to the medium. The rakes which are mounted on the central shaft keeps the medium in suspension by gentle agitation. The float removed by over flow while the sink by a pump or internal air lift. 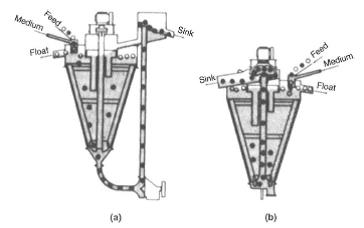 Drum separators: Drum separators are built on several sizes, up to 4.3 m diameter by 6 m long, with maximum capacities of 450 t/h and can treat feed up to 30cm in diameter. Removal of the sink product carried out by lifters which are fixed to the inside of the rotating Drum. The lifters empty into the sink launder when they pass the horizontal position. The float product overflows at the opposite end of the drum from the feed chute. By the action of revolving lifters longitudinal partitions separate the float from the sink. When compare with the cone separator it minimizes settling of the medium particles and giving a uniform gravity throughout the drum. 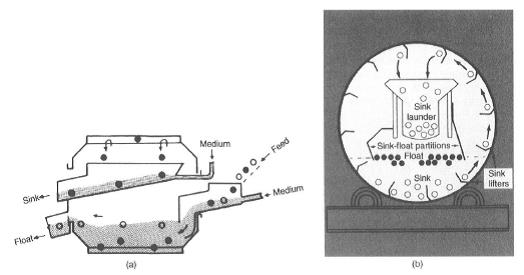 Two stage separation is required when single stage dense medium is not giving desired recovery. In this situation, two- compartment drum separators are mounted integrally to make one feeding to the other. In such a manner, the lighter medium in the first compartment separates float and the sink product is lifted to second compartment. These are very useful in the coal industries because of their simplicity, reliability and relatively small maintenance needs.

(1) What is Dense Medium Separation (DMS)?
Ans: It is a process where a suspension of dense powder in water is used to form a type of heavier liquid to separate mineral process products in sink- float process.

(2) Which powder can be used in the application of Dense Medium Separation?
Ans: Ferrosilicon powder.

(3) What is the classification of the separating vessels with respect to DMS?
Ans: Gravitational vessels (Static bath) and centrifugal vessels (Dynamic bath).